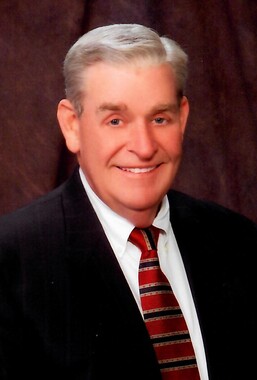 Jim Melton, 79, of Amarillo and Granbury, TX, went to be with the Lord on Thursday, September 12, 2019.
Services will be at 11:00 A.M. Tuesday, September 17, 2019, at the Central Church of Christ Chapel, with Jaron Barrington officiating. Private burial will take place at Memory Gardens Cemetery. Arrangements are by Boxwell Brothers Funeral Directors.
Jim was born August 6, 1940, to Ray and Sylvia Melton, in Olton, Texas. The family moved to Amarillo, TX in January of 1942. Jim was a proud Palo Duro Don, class of '59. He was inducted into the Palo Duro High School Hall of Fame in 1984. He played football at Cisco J.C. and attended Amarillo College as well.
Jim worked for First National Bank of Amarillo for 20 years. The last 5 years he was President of their subsidiary, First Bank of Amarillo. He went to work as a State Farm Agent in 1985, where he retired 20 years later in 2005.
Jim was married to the love of his life, Barbara, for 57 years. Upon retirement, they moved to Granbury, TX to be closer to their grandchildren.
Jim lived his life focused on faith, and love of his family, and friends. He was a man of impeccable character and valued integrity above all. He helped more people than we will ever know, and he will truly be missed by all.
He was preceded in death by his parents.
Jim is survived by his wife, Barbara Melton; sister, Vianna Pace; brother, Woody Melton; daughter, Jamye McRae and husband Ray; son, Marty and wife Sharon; grandchildren, Boyd, Brock, and Bennett Melton, Jordyn Murphy, Jaxon Kelley, Hayden McRae, and Magen Burris; great-grandchildren, Hadley Murphy, and Berkeley Burris.
The family will receive friends at Boxwell Brothers from 5-6:30 P.M., on Monday, September 16, 2019.
Sign the online guestbook at www.boxwellbrothers.com.
Published on September 16, 2019

In Memoriam published in