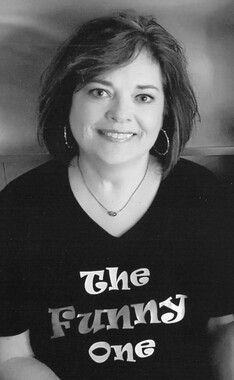 Back to Andrea's story

GRANBURY - Andrea Mankins McKenzie born in Clarksville Texas on April 27, 1963 died after a hard and courageous battle with ovarian cancer surrounded by her family at home on January 31st 2020.

Andrea was passionate about her faith, loving her family especially her precious grandbabies and rooting on her favorite football teams, The Texas Longhorns and Dallas Cowboys.

She was a member of Lakeside Baptist Church and gained a second family there.

To know Andrea was to love her. She never met a stranger and had an infectious laugh that filled the room. She had a special gift for knowing when her family and friends were hurting.

Andrea is preceded and death by her parents, Ronald and Gayle Mankins and her nephew PFC Aaron Mark Hudson as well as her grandparents and numerous cousins, uncles and aunts.

She is survived by her husband, Jeff and three adult children, two daughters-in-law and five grandchildren. Michael, Matthew and Brooke. Michael is married to Cortnie, they have two children, Adelaide and Garrison. Matthew is married to Lindsie, they have three children, Laken, Daxen and Rayla. She is also survived by her sister, Annette and brother-in-law Mark Hudson as well as her niece Lezlie Ferrell, and Jonathan Ferrell, who have two children, Silas and Evelyn.
Per Andrea's request, she would like attendees to wear red which was her signature color or teal which is the ovarian cancer awareness color.
In lieu of flowers, she wanted donations to ovarian cancer research. Please make a donation in her memory to ocrahope.org. Also please feel free to find her public page on Facebook, Fight Andrea Fight to learn more about her battle with ovarian cancer.
Published on February 3, 2020
To send flowers to the family of Andrea Mankins McKenzie, please visit Tribute Store.

Send flowers
in memory of Andrea

A place to share condolences and memories.
The guestbook expires on May 03, 2020.

Sharon Anderson
Andrea spirit was very strong. She waged a mighty battle. Finally, Gods time to call her home. She will be remembered fondly by all family members and friends .

Bright and Beautiful Spray was purchased for the family of Andrea Mankins McKenzie.  Send flowers

Michelle Mungon
I met Andrea during her fierce battle and adored her from the first moment. She was a beautiful lady inside and out. My prayers go out to Jeff and family for comfort. May God wrap his warmth and love around them during this difficult time. Andrea may be gone from this earth, but not forgotten.
Denise Sartain

Forever in our hearts